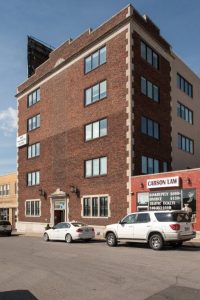 According to municipal records, the initial building was built in 1920 with additions in 1924 through 1926, resulting in the five-story structure it is today. Allegedly, it was part of a larger parking structure which utilized an elevator to move automobiles from street level to its upper parking floors.  Its small basement housed a low pressure boiler that heated the building.

The property is located 3 miles south of downtown Kansas City. One hundred fifty years ago, Westport was the jumping off place for the Western frontier. Today it remains a a distinct neighborhood within the Greater Kansas City  Metropolitan Statistical Area (MSA). The community of Westport predates Kansas
City itself, priding itself as the city’s original shopping and (according to its current residents still its best) entertainment district.

Westport connects the high-density high-rent area of downtown Kansas City with the old, but affluent Country Club Plaza with its surrounding neighborhoods.  Built in 1922, Country Club Plaza is nationally known as the original prototype for “lifestyle” mixed-use developments.

4010 Washington Street is less than a third of a mile off the Metropolitan Area Express’s Main Street Max route connecting nearby Country Club Plaza and points as far as South as Waldo (about 4 miles) with downtown Kansas City, providing convenient and very affordable Public transportation.

Westport is characteristically a mosaic of older (1800 to early 1900) structures, interspersed with infill properties built over the intervening years to fill in gaps created by demolition of structures destroyed by fire or just deemed no longer economically viable. This process of renewal continues throughout the area driven by Westport’s proximity to its two highly desirable neighbors, coupled with its much more affordable prices.  This process of selective demolition, rehabilitation and adaptive reuse is true of all the property segments studied; including single-family homes (both owner occupied and rental), apartments, retail, hospitality, lodging and offices.  Conspicuously absent is industrial and modern warehousing.  A comprehensive view of the ethnic and socio-economic make-up can be found in the demographic section of this report. 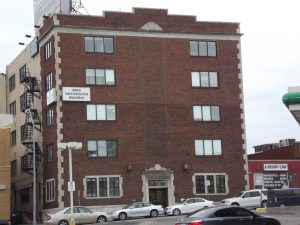 In 1939, the City took the adjacent property at 4012 Washington; and, using Works Project Administration funding, built Fire Station No. 19 on the site.  This cut off vehicle access to the Subject property’s elevator, forcing the owners to undertake renovation to accommodate adaptive reuse of the building.  In 2006, this fire station was replaced by new Fire Station No. 32, which had four bays and enough room to combine the resource of both Stations No. 19 and No. 32.  This achieved both economic and operational efficiency.

Ray Elder, Historian of the KC Fire Historical Society provided the above account.  The former fire station property is currently home to a boutique coffee shop and grindery.

Allegedly, disagreements between family factions owning the original building led to its subdivision. Regardless of the cause, the property split resulted in a somewhat intertwined and convoluted relationship between the two resulting properties.  The Subject property, 4010 Washington, is the southeast portion of the original structure together with an associated surface parking lot to the northwest, the two being separated from each other by the other property.  The resulting configuration means that the Subject building does not have direct access to its parking lot; but, requires and exterior traverse of approximately 50 yards to the building entrance.